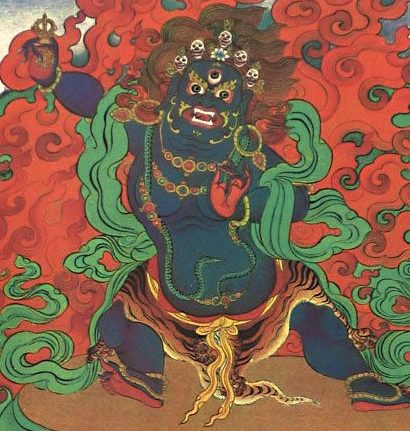 Anger: A Force for Change

Of all the countless complex and subtle human feelings, it’s hard to find a more disturbing emotion than anger. In my work as a therapist, I witness ambivalence about anger on a daily basis. “I feel angry with my spouse … my child … my friend … my boss,” people say. “And I read these spiritual books that say I shouldn’t be angry, that anger is a disturbing emotion, a poison, a sin—or that it’s a coverup for “real” emotions like fear.  It seems like I shouldn’t be feeling it at all —but I do.”

What a bind—to feel something we’re not “supposed” to feel!  The truth is, we can’t control our feelings, any more than we can control the weather. How about a more skillful way to work with anger?

I believe that every emotion tells us something important, about our inner world and sometimes about the outer one too. Anger (by which I mean anger about a specific situation, as opposed to simmering global rage)  is our wisdom’s way of telling us something needs to change. Feeling angry is part of the built-in emotional guidance system we all come equipped with as humans.

As a Buddhist-oriented psychotherapist, I take a perverse delight in expressing the view that anger is a powerful, profound and utterly true emotion that is valid on its own terms. Anger is an honest response to situations in which our natural integrity has been violated—and it gives us the energetic boost necessary to restore these boundaries. Anger is the force we need to set boundaries, make limits, take action. It’s the power to make things different.

Carolyn is in her 30s, bright, pretty, and depressed. She talks about how sadness is her mother’s forte, compassion her strength. Underneath it all lurks enormous anger that sometimes unexpectedly explodes. For women of her mother’s generation, being a meek victim was completely acceptable. Assertion, or aggression, was not. The good girl is sad, never mad. And Carolyn’s a good girl.

She is also stuck, and unhappy. Not only that: she’s insightful enough to see the ugliness of the repressed anger, and courageous enough to take it on.

That anger has the power to change your life, I say. Look at it. Try it on for size. Notice how it feels in your body, in a visceral way. (“I feel so much bigger!” she reports with surprise). In my experience, I continue, anger is a powerful energy that makes changes in the world. Maybe you needed to put away that power earlier in your life—but now you need to reclaim it to move ahead.

Working with anger in this way requires a real awareness of embodied experience—truly feeling the surge of energy, all the way down to the toes. Noticing the tight jaw, the clenched fists, and working to enlarge that energy, while still containing it. We can use the visceral sensations of anger to increase our self-definition—something that’s especially important if we’re being guilted or manipulated. Even if the situation lies years back in the past, it can be empowering, in the best sense of the word, to fully experience what our bodies have been telling us all along.

This kind of work can fuel a breakthrough from feelings of hopelessness and depression that often lie over anger, masking it. Anger has abundant energy to change our lives, if we let it—and those changes don’t have to be made aggressively or unpleasantly, but rather, powerfully and clearly.

For chronically angry people who exhibit the same problems in reverse, experiencing anger always rather than never, the work is still in feeling anger and in staying with that feeling, rather than flipping into destructive rage—in containing it rather than reacting or lashing out. The task here is to pay attention to anger’s power and let it work on you, solidifying your own boundaries rather than wreaking havoc in the world.

When conflict presents itself, you have choices. You can attack back, creating a lot of damage. You can retreat—and ignore the opportunity being presented. Or, you can respond honestly, in a centered and grounded way that’s powered by the anger flowing in your veins: I’m hurt by what you did. That is not okay with me. Anger fuels a clear sense of self-definition that can heal the blurring of unconscious enmeshment.

Notice how anger sets a clear boundary, one that says, you don’t cross this line. You don’t mess with me, don’t manipulate me. This is my space, and over there is yours. This isn’t selfish—it’s just common sense, and respect for both yourself and the other person. The strength of anger lies in its ability to make boundaries, to clearly define differences. This is its purpose, and we disrespect that purpose when we shove it under the carpet and ignore it. (For more on this rich topic, I steer you to Karla McLaren’s brilliant book The Language of Emotions.)

There’s an immutable Vajra quality to anger, symbolised in Tibetan Buddhism by the wrathful deities. These are not evil demons, but enlightened buddhas, compassionate manifestations of awakened mind that skillfully use anger’s pure energy to cut through negativity and neurosis. We could all use some of this wrathful energy in our lives, directed at internal and at external obstacles alike. The fearlessness and purity of anger, as symbolically expressed by the wrathful deities, underscores anger’s potential as a skillful and powerful force for change.